Sometime after 9/11, the first responders were interviewed about how well all the teams from multiple departments and areas came together for the rescue and the fire. The chief being interviewed pointed to all the training they had done. They had trained on individual events that occurred but never … END_OF_DOCUMENT_TOKEN_TO_BE_REPLACED

On Friday, I spoke with a woman who was working 80 hours or more per week to meet the expectations of her boss. To be fair, her boss might not realize how much time she is putting in. We discussed how often we assume others know what we are doing and how often they don’t realize what we are doing to … END_OF_DOCUMENT_TOKEN_TO_BE_REPLACED

When McKenzie published the reading lists of global CEOs, I discovered only one book appeared on multiple lists: four CEOs listed The Seventh Sense by Joshua Cooper Ramo. These guys (yes, all men) are charged with guiding their companies to success in the coming months and years, and four chose this … END_OF_DOCUMENT_TOKEN_TO_BE_REPLACED

What does it take for a company to survive and even thrive for more than one or two or five centuries? In The Living Company, Arie de Geus and his colleagues analyzed companies that were older (more than 150 years) and at least as large as their own company, Royal Dutch/Shell, from around the … END_OF_DOCUMENT_TOKEN_TO_BE_REPLACED 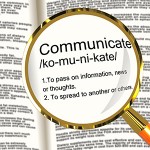 You have someone on the team who isn’t doing his fair share. The guy hasn’t been a super star but a good worker most of the time. What do you do? Option 1: Get on his case; tell him to get with the program because there are five other guys waiting to take his place. Option 2: Point out what you’ve … END_OF_DOCUMENT_TOKEN_TO_BE_REPLACED

We use cookies to ensure that we give you the best experience on our website. If you continue to use this site we will assume that you are happy with it.OkPrivacy policy